The most lonely house in Belgium

Near the Belgian village of Kluisbergen you can find this remarkable little house. It seems to been taking away from the city and planted here in the middle of nowhere. The city style house isn't part of a street or even a village, it just stands there, in the fields, all by itself. 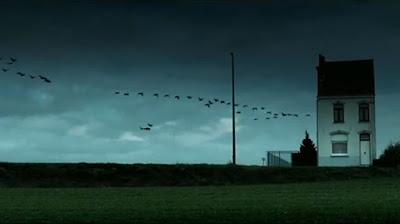 In 2014 a local film director had seen a picture of the house and decided to use the location in a movie based on a very famous Belgian detective series called Witse. The at that time 88 year old lady living in the house gave the film crew a two day permission to complete the shooting and they were only allowed to use the hal and the garage. Later the lady told the press that she was keen on her privacy, otherwise she would have moved to the city a long time ago she said. She also stated not to publish the address of the house in any publication.
Famous Belgians