The castle that became famous in Hollywood

Belgium has a lot of castles, actually, it has the most castles of all European countries. They come in all shapes and sizes. But there is one castle that strikes every imagination, castle Nottebohm.
Located in the north of Antwerp, in the village of Brecht, this remarkable building seems to be escaped from some fantastic Hollywood movie or even more a Pixar animation cartoon. The design of the house is done in a very strange way, in an eclectic style incorporating elements from the neo-Flemish Renaissance, the traditional brick and sandstone style and the cottage style, all combined. Architect Ernest Pilgrims draw the plans for the castle. It was built in 1834 by the family Nottebohm as a summerhouse. The family used it till 1943 when the German army occupied it in the second World War. After the war, the family didn't use it a lot anymore and in 1950 they rent the castle as a hotel and restaurant. Later the company who rented the castle went broke and the family had the plan to sell the castle in 1980. However with no luck, so the building stood empty for years and got in decay. 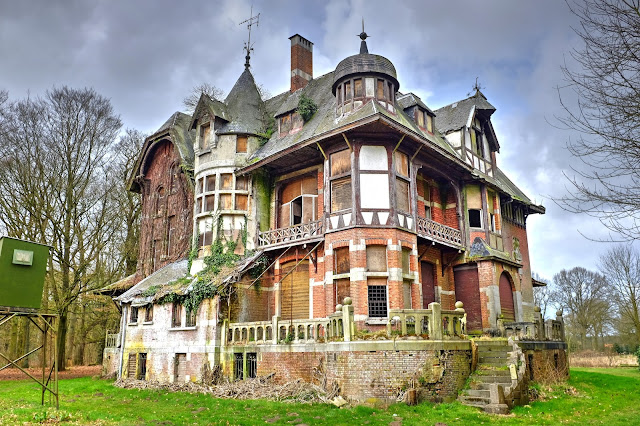 It is still in decay today and selling it seems to be impossible. Even more, people say it's been haunted from the day it was for sale. So the building is just standing there, with probably no future and waiting to be demolished someday.
The castle however was the inspiration for a book by Ransom Riggs Miss Peregrine’s Home for Peculiar Children, The author of the book based his creepy orphanage on the ruined castle after seeing a picture of it on the internet. Director Tim burton who made a film of the book first wanted to use the real castle as a set location but later decided not to use it and rebuilt it in film studios in London and Florida. However some scenes were shot in the totally rebuilt garden surrounding the house. 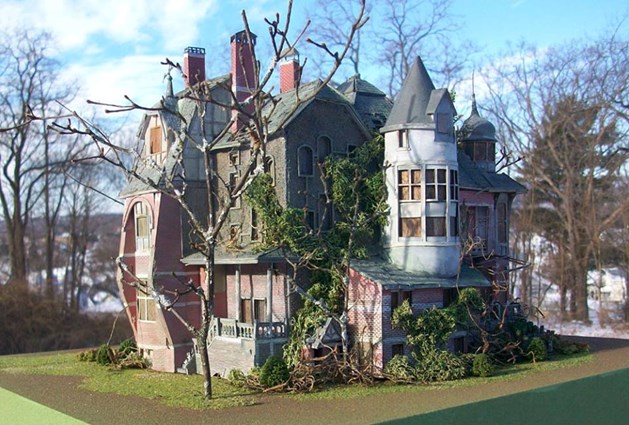 There is still a striking resemblance between the real castle and the film studio version. That way the castle of Nottebohm is a kind of a fantastic Hollywood set location after all.