The Inventor of the first kitchen robot was a Belgian

Asking about Belgian inventors, you will probably first think of people like Adolphe Sax, the inventor of the saxophone, Or Zenobe Gramme, who improved the alternator. Or maybe Leo Baekeland, the creator of the first synthetic plastic Bakelite. However, Belgium was at the birthplace of a whole series of other inventions, even in your kitchen. What about the first kitchen robot?

Still in millions of kitchens today and spread over 5 continents you can find the "Passe-Vite", French for "Passing true fast". But probably you know it as the Food Mill. The Food Mill is a simple but nevertheless extremely handy device, which allows small amounts of soft foods such as cooked tomatoes, apples, or potatoes to be crushed. The device is in a sense a bridge between the ordinary kitchen tools and the later invented electric mixers or kitchen robots.

Victor Simon was born in 1888 in the village of Hainaut Carnières, a place in the Belgian Ardennes, the French-speaking part of Belgium. One day, after hearing his wife Lucienne complain about the hard work it was to make mashed potatoes or soup, he had an idea. Because in these days people used a wooden pestle to crush vegetables and then pushed them through a kitchen sieve to make them soft. This could be done better Victor must have thought and a few months later, at the end of 1927, he invented his first food mill.

The production of the first metal Passe-Vite was done by Richard Denis, a local blacksmith. Together they started the company, Simon & Denis. The Passe-Vite was first introduced and offered for sale in 1928 at a Brussels food fair. The stand of the newly started business was very simple and barely a dozen Passe-Vite were handmade and ready to sell. But it was a great success and all of them were easily sold. Once past the start-up phase, the Passe-Vite was made by machines. The company flourished and manufactured more than 5 million "Passe-Vite". 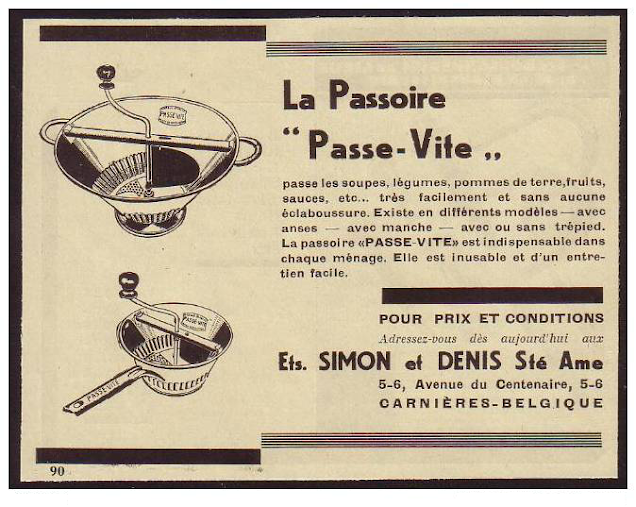 Aldo Victor had a patent on the Passe-Vite he could not stop other companies to start making their own version of the at that time popular kitchen device.  One company even sold more than 15 million of a slightly altered Passe-Vite. 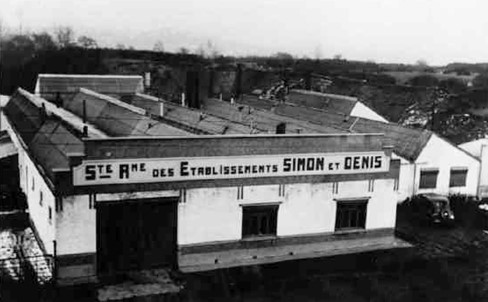 The company tried adding more possibilities to the original Passe-Vite design by adding a replaceable grater and cutter to the device. But the competition was getting too hard and in 1978 the company went bankrupt. Victor Simon died a few years earlier, in 1972. At the end of his life, he did not know his invention and his company would end in bankruptcy. Still today you can find some real Passe-Vite devices.