After having been in possession of different noble families and knights for centuries, the last landlady of the castle, Anna Francisca de la Kethulle died in 1780. Her 2-year-old great-grandson Louis Philippe Vilain XIIII inherited the castle. Viscount Jean Jacques Philippe Vilain XIIII became a well-respected Flemish politician. Under his reign, there was a lot of renovation works done in and around the castle.


In 1803 the park pond was dug and a new entrance was built, a design by the Antwerp city architect François Verly. Later, in 1811 Verby drew the plans for a big renovation of the castle and he is responsible for the castle's present form and design. Verly was inspired by Windsor Castle in England. The wrought iron suspension bridge was made in 1824 by engineer Vifquain. 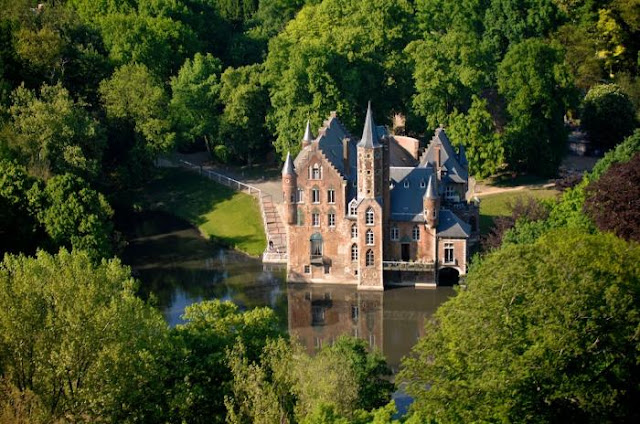 In 1989 Jean Vilain XIIII, the last occupant of the glorious race Vilain XIIII sold the castle to the municipality of Kruibeke. Since then, again a lot of beautification works have been carried out, and also the historic suspension bridge, the oldest of its kind in Europe, was restored.

Nobody lives in the castle now, it is used for meetings and seminars. It is also open to the public. The English park surrounding the castle is more than 33 hectares big and was one of the finest in the country, it had various picturesque construction, works, most of them are gone now.
Castles