The legend of the breast feeder of Ghent

By Harry fabel
Mammelokker is a sculpture and a building from around 1741. It was built in Louis XV style by the architect David 't Kindt and is situated between the tympanum of the Belfry and the Cloth Hall in Ghent. The building holds a depiction of the Roman Cimon and Pero. In this legend, Pero saves her father from starvation by suckling him in jail. The legend dates back to Roman times.
Cimon is an old man who is in prison and condemned to starvation. His daughter Pero is allowed to visit him, but may not bring him any food. Every day when she visits him, she gives him her breast milk which keeps him alive. This is how the building got its name "Mammelokker", meaning "Breast feeder" in an old Ghent Dutch dialect. 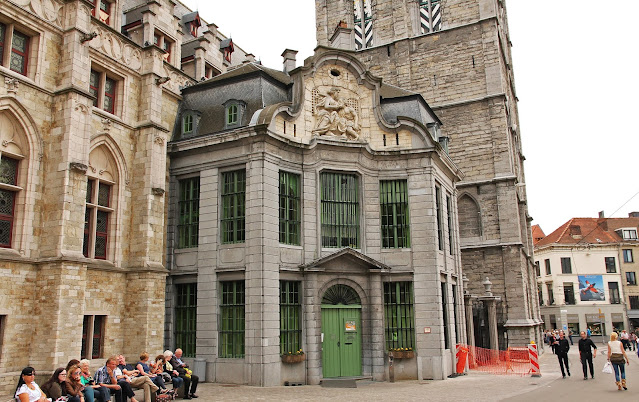 The building was originally intended as a jailer at the city jail, which from the mid-eighteenth century to the early twentieth century, was placed in the crypt of the Cloth Hall. Today the building serves as the office of the Ombudsman of Ghent. It has since December 28, 1936, been a protected monument and belongs since 1999 to the UNESCO World Heritage Site as part of the Belfry.
Location: Gent, België