The figure of Lange Wapper or in English Long Flag is often represented as a tall and thin male person with a very accentuated beardless chin. there is a statue of Lange Wapper in front of Het Steen castle in Antwerp. The poltergeist comes out at night and haunts the drunk people on their way home. First as a little guy in their shadow, but he can make his shadow bigger until it protrudes above the houses. If the scared drunkard is fleeing his home, Lange Wapper can look through the window of the drunkard's house for hours. 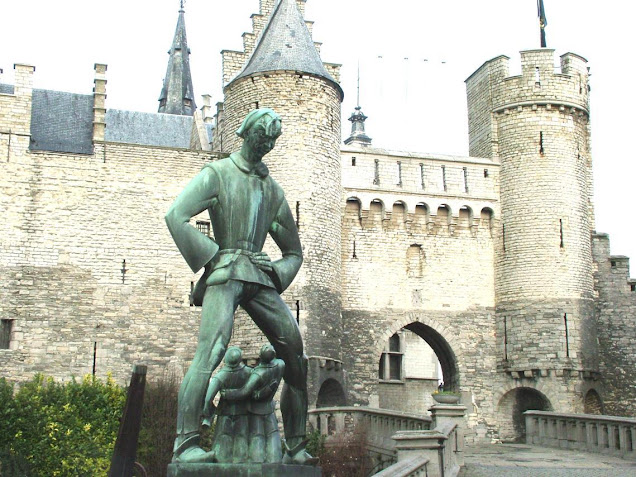 Sometimes Lange Wapper can disguise himself as a small child to drink the breast milk of a young mother. And if a parent wants to take the child to another room to care for and to put it in a crib, Lange Wapper can let himself grow so large that he does not fit in that room. In the city of Antwerp, there are different legends known about Lange Wapper In Hoboken he would have grabbed the mast of a ship and had the thing thrown into the air to the other side of the river.
Near the Groenplaats there once lived a young lady who had four suitors. One night she let them all come to visit her one after the another. But instead, they came to Lange Wapper, who had assumed the form of the young lady. The first suitor had to prove that he loved her and had to sit on a big cross in the cemetery for two hours. The second suitor had to lie down for two hours in a coffin under the cross. The third one had to knock on the coffin and wait for them to pick him up. The fourth had to walk with a long metal necklace around the cross. When he did that he found the other three suitors dead. The first suitor was in shock and fell dead from the cross when the second got into the coffin. The second died of fear when the third knocked on the chest and the third died when he heard the sound of the chain and thought that the devil was coming to get him. The fourth suitor went crazy, jumped into the river Scheldt and drowned. 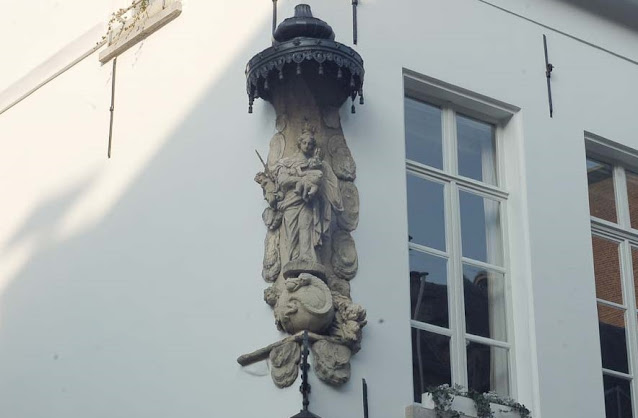 Another legend connected with Lange Wapper, explains why there are so many Maria statues on the facades of the houses in the city: The people of Antwerp, which hated Lange Wapper for his constant bullying, discovered that Lange Wapper could not bear the effigy of Maria statues. Therefore they placed Maria Figurines on the facades of their houses. Those figurines scared Lange Wapper continuously and he had to flee from the city, where he eventually fell and drowned in the river Scheldt. Today you can still find the Maria figurines on some of the Antwerp houses.