The water well of Quinten Matsijs

The maker of the well, Quinten Matsijs was a blacksmith and painter. He lived from 1466 to 1530 and was a founder of the Antwerp School. The Antwerp School is a term for the artists active in Antwerp, first during the 16th century when the city was the economic center of the Low Countries, and then during the 17th century when it became the artistic stronghold of the Flemish Baroque paintings under Peter Paul Rubens. Quinten Matsijs's work is especially religious and he is praised for his use of color and carefully balanced compositions, His paintings hang in museums and in private collections all over the world. 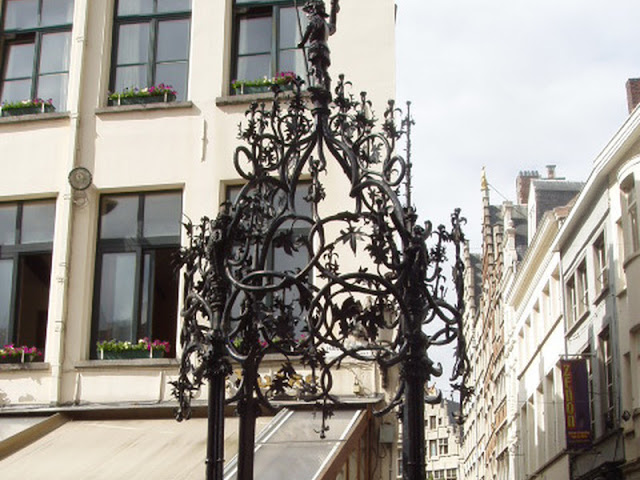 Matsijs also made the "putkevie" (a decorated wrought iron gate on a well) on top of the well at the Handschoenmarkt that depicts the legend of Silvius Brabo and Druon Antigoon. The inscription on the well reads: ‘Dese putkevie werd gesmeed door Quinten Matsijs. De liefde maeckte van den smidt eenen schilder.’ What do these Flemish words mean? 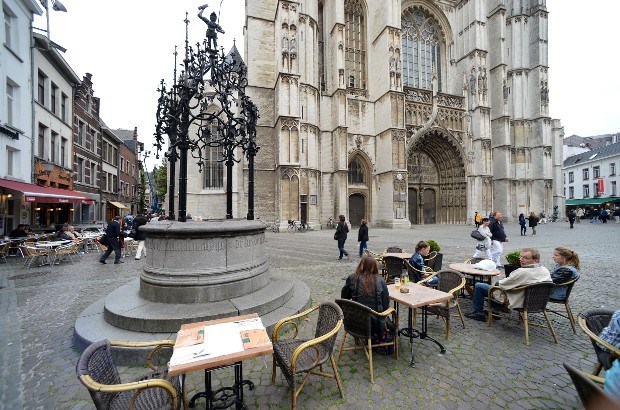 The story goes that Matsijs when he was not a painter yet but a blacksmith, had fallen in love with Catherina Heyns. Her father was also a blacksmith but thought that just another blacksmith was not good enough for his daughter. So Quinten Matsijs retrained itself into a painter and turned out so well that he finally could marry Catherine. The words on the well-meaning; "The ironwork for this well was forged by Quinten Metsys. Love makes the blacksmith a painter."
Antwerp