The Ghent Altarpiece, also called the Adoration of the Mystic Lamb or The Lamb of God, in Dutch, Het Lam Gods is a very large and complex early 15th-century Early Flemish polyptych panel painting. The altarpiece comprises 12 panels, eight of which are hinged shutters.
Each wing is painted on either side, giving two distinct views depending on whether they are open or closed. Except for Sundays and festive holidays, the outer wings were closed and often covered with cloth. It was commissioned to Hubert van Eyck, about whom little is known. 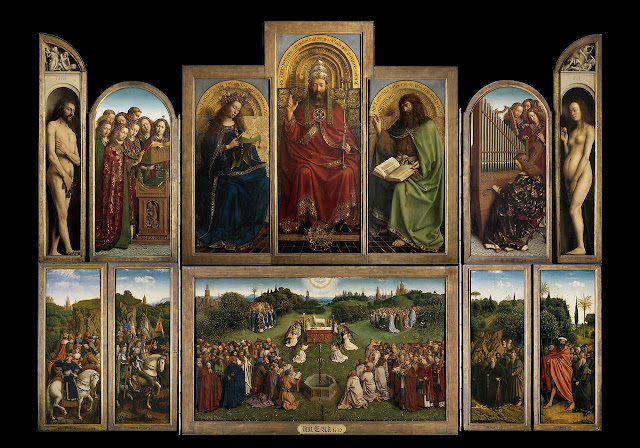 In April of 1934, two panels from the work were stolen in an attempt to extort money from the Bishop of Ghent. One of the panels was returned as proof that the thieves were serious, and the other, depicting the Righteous Judges, has never been found. A stockbroker called Arsène Goedertier claimed to be the thief but he had a heart attack before he could tell the location of the second panel. He summoned his lawyer, Georges de Vos, to his deathbed. Just before he died, De Vos claimed, Goedertier whispered: "I alone know where the Mystic Lamb is.
The information is in the drawer on the right of my writing table, in an envelope marked 'mutualité.'" The lawyer followed the instructions and found carbon copies of the ransom notes, plus a final, unsent note with a tantalizing clue about the stolen panel's whereabouts: rests in a place where neither I nor anybody else, can take it away without arousing the attention of the public. Although several people have claimed to know its whereabouts, it has never been recovered and some now believe it to be destroyed. Others, though, think it will be found one day, and a number of people still look for it.

During World War II the other panels were taken from the cathedral by the German army and hidden in the Salt Mines of Altaussee, together with thousands of other artworks. 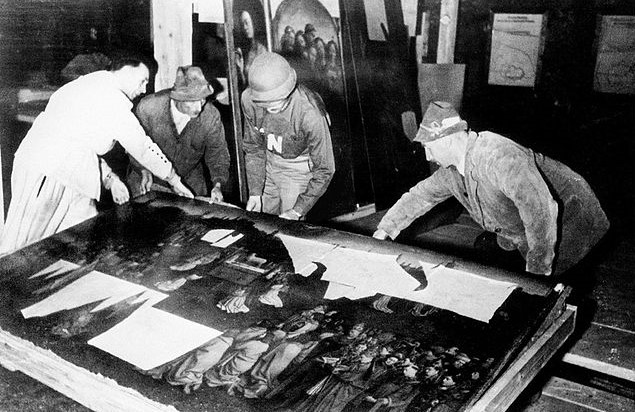 The altarpiece was recovered by the American army MFAA monument men. After the war and was returned to the Belgian government in a ceremony presided over by Belgian royalty and held at the Royal Palace of Brussels, where the 17 panels were erected for the press. The lost panel was replaced with a copy by Jef Vanderveken in 1945.  The restoration of all panels started in September 2014.
Churches Ghent Museums