The Dulle Griet of Ghent

By Harry fabel
Dulle Griet is a monumental iron bombard located in the city of Ghent. Because of the original red color, the gun was traditionally also called Rode Duyvele old Flemish for Red Devil. The bombard dates from 1431 and was probably made by Jean Cambier, the major arms supplier to the Duke of Burgundy, Philip the Good. She was taken in 1578 along with other weaponry from the city of Oudenaarde and brought to Ghent to be used in the fight against the Spaniards. Whether the gun was stolen or sold is unclear. 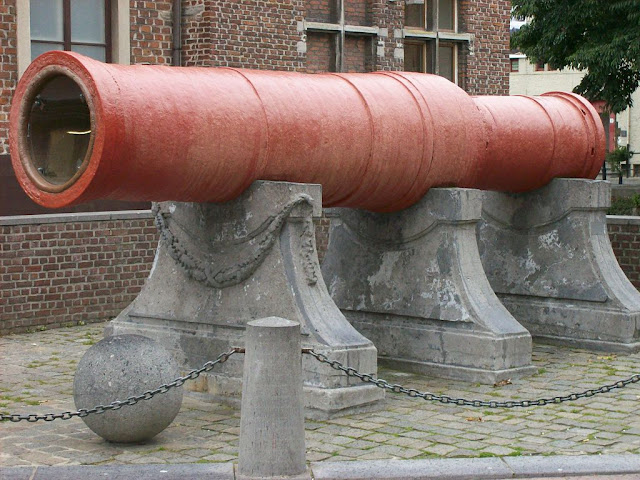 The bombard is made of wrought iron rods around which iron hoops were laid. With a length of 5,025 meters and a mass of 12 250 kg, the canon was one of the biggest bombards of its time. The original mass has been possible up to 12,500 kg, but over the centuries the total mass decreased by rusting. The canon could bombard projectiles with a diameter of 64 cm and an estimated mass of 295 kg. The wooden trestles where Dulle Griet originally rested on were replaced in 1783 by decorated brackets of bluestone. Since 1943 the Dulle Griet is a protected monument. The square where the gun is on is called Grootkanonplein, meaning Big gun square.
Location: Vrijdagmarkt, 9000 Gent, België