The birthplace of the Belgian flag

Opposite the Galerie Royale Saint-Hubert in Brussels, on the Grasmarkt and near the Grote Markt there is a Panos sandwich shop that has been there for years, but the facade of the building has a certain historical value. There you can see the relief of the Belgian flag.

Just below it, there is a memorial plaque with the sentence: "On August 26, 1830, Mrs. Abts made the first two Belgian flags here." In other words, this is the place where the first Belgian flag was born.

To better understand Belgium's independence, we have to go back to the summer of 1830. In July of that year, there was a revolution in France. The people revolted because the economy had been bad for a while. The dissatisfaction spread to Brussels because the economic situation there was not good either. The people in Brussels were also very unsatisfied.

On August 25, an opera was played in the Munt theater in Brussels in honor of the Dutch king, who at that time was also the king of former Belgium. In the opera "La muette de Portici" there is a text in which people talk about the sacred love for the fatherland. And that text excited the spectators in the theater.

After the performance, a revolt broke out many angry citizens went to the house of a Dutch bookseller who had good relations with the Dutch king. The revolters destroyed his shop and apartment and from the curtains, they tied a flag in the French colors that they waved around in the streets of Brussels. They had chosen the French flag colors to honor the French Revolution en now their own.

But shortly after, two journalists come up with the bright idea to have a new flag made. A Belgian flag! "They entered the building on the Grasmarkt, the current Panos sandwich shop was a stately fabric store at the time, and they asked the owner to quickly sew the new flag together. The colors were those of the coat of arms of the former Duchy of Brabant. It depicts a lion of gold (yellow), on a background of sable (black), with red claws and a red tongue. Originally, Brussels belonged to the Duchy of Brabant, so it was logical that Brussels residents who demanded their freedoms chose those colors.

In 1830, the Belgian flag unofficially still consisted of three horizontal stripes. The tricolor was described in the constitution, but it was not stated in which direction and order the colors should be. It was not until a long time later that the flag took its final shape: vertical bands instead of horizontal. 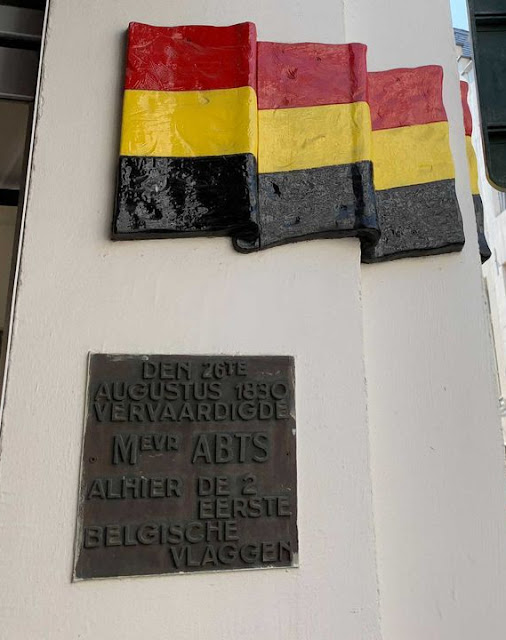 The horizontal stripes, topped with red, yellow, and then black, could be confused from afar with the Dutch flag, red, white, and blue. They absolutely wanted to avoid that. And vertical color bands had another advantage because the French flag also has vertical bands. And they still wanted to maintain a certain link with the values ​​of the French Revolution.