Did you know that the gasoline engine was in fact invented by the Belgian Étienne Lenoir? Before the invention of the two-stroke gas engine, machines mainly operated with steam. These were large and only suitable for large factories.

The Belgian inventor Lenoir wanted to develop small appliances that could run on the city or light gas that was available everywhere in the major cities. The principle was a steam engine in which a mixture of 6% city gas and 94% air was drawn in the first half of the first stroke. Halfway through the first stroke, the uncompressed mixture was set on fire with a spark plug (also an invention and Lenoir patent). The burning gas mixture expanded and pushed the piston with great pressure. 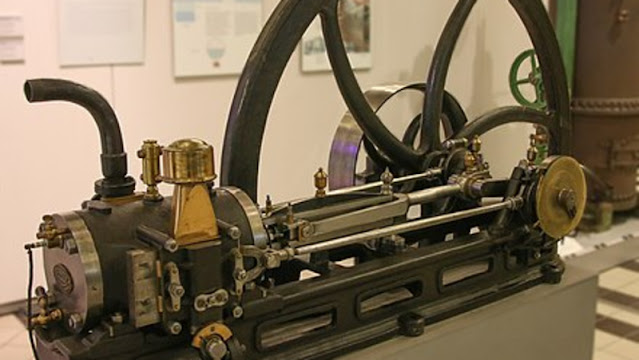 During the incoming second stroke, the burnt gas mixture was expelled. The machine of Lenoir combines various technical knowledge from his time: both the steam engine and the recently invented ignition coil by the German inventor Heinrich Daniel Ruhmkorff, the ignition via the spark plug, also Lenoir's own invention. The machine also uses Street's patented piston. It has internal combustion and double-sided action like the French inventor Lebon and is spark-ignited like the machine of the Swiss inventor Isaac de Rivaz. The first internal combustion engine was invented by combining these elements.

The two-stroke gas engine inspired Nikolaus Otto's engine in 1876. In 1884 Lenoir built his first four-stroke engine based on the Beau de Rochas Cycle principle. Millions of cars on the road today owe their spark plugs, overhead valves, ignition, and rocker arm to Lenoir. Lenoir is considered one of the 100 greatest inventors of all time.