Sœur Sourire, a smile between heaven and hell

By Harry fabel
Sœur Sourire, French for 'Sister Smile' was the stage name of Jeanne Paule Marie Deckers who was born in Brussels in October 1933. She was a Belgian nun in the Dominican monastery in Fichermont, near Waterloo. She regularly sang her self-composed songs there. They were received so well that the monastery came up with the idea to have a record made which could then be given to visitors and novices.
In 1963 the record was recorded in a studio in Brussels. The song Dominique about Dominicus Guzmán, the founder of the Dominican order, was immediately picked out by the people of record company Philips. They requested and were allowed to release the song as a single, with a worldwide hit as a result.
In fact, it was in the top spot of the US charts for some time and was covered in many different languages, both by Deckers herself and by other artists. The album The Singing Nun also took first place on the Billboard charts. The song Dominique received a Grammy Award in the category "Best Gospel Or Other Religious Recording" and 2 more nominations plus one nomination for the album.
After her success, which even made it into a Hollywood movie named "The singing Nun" with Debbie Reynolds in the lead, Deckers went back to the monastic life, until she retired in 1967 to devote herself entirely to her music career. This time under the stage name Luc Dominique. She sang religious songs and also recorded a lot of children's songs, but it was not a success.
The Belgian tax authorities discovered that Deckers still had to pay any back taxes for income that in fact had been received by the monastery and of which she herself had not received any money. In 1982 she recorded a disco version of her big hit, Dominique, under the name Sœur Sourire again, hoping to make some more money to pay off her tax debt. But the record did not yield any money. 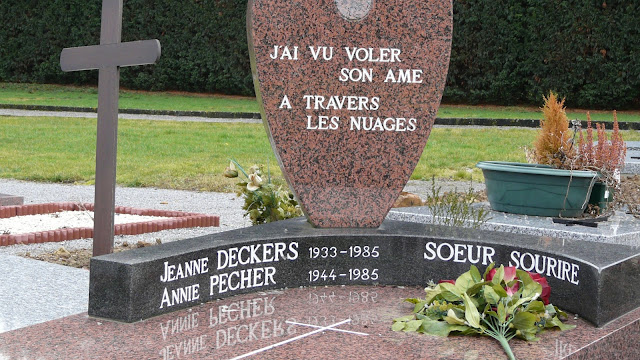 In 1985, along with her girlfriend Anne Pecher, she committed suicide by taking an overdose of sleeping pills, according to her lawyer taken with a glass of cognac. Everything in their house was already packed and it said exactly what to do with it. Labels were written for whom the items were intended. The women are buried together in one grave. Jeannine Deckers passed away at the age of 51.
You can find the song Dominique here