The city hall of Antwerp

By Harry fabel
In the 16th century, the population of the city of Antwerp increased fast, as did the amount of work by the mayor and the aldermen. This created the need to replace the former city hall with a new one. Around 1540 the architect Dominicus de Waghemakere was therefore commissioned to draw a design for a new town hall. However, another pricey project, a new city wall was given priority, which meant that the plan for a new city hall was postponed.
In 1560 a new design came about, involving architect Cornelis Floris De Vriendt, sculptor Willem van de Broeck, poet Willem van Haecht and the painters Jan Metsys and Lambert van Noort. The intention was to design a town hall in the then-new Renaissance style.

To reduce construction costs, the ground floor of the building would consist of retail premises. With the rental of this, it was hoped that part of the costs could be recovered later. The building itself would be placed on the Grote Markt. This square was communal property and therefore would not cost anything. The building however costed much more than expected. The roof was finally completed in the summer of 1564 and the inauguration followed on February 27 of the following year.

Already in 1576, the town hall was destroyed. Soldiers of the Spanish king, who had not received any salary for months, decided to plunder the city of Antwerp - the richest city in the region. Because there was a lot of resistance from the town hall, the soldiers set fire to the building. The roof and the interior did not survive the blaze. The repair work started two years later.
Today, the town hall is of great cultural importance. In 1999, the Antwerp city hall was included on the UNESCO World Heritage List. There is a lot to admire in and in the most stately building of the city. The Renaissance facade, beautiful halls, and numerous works of art. 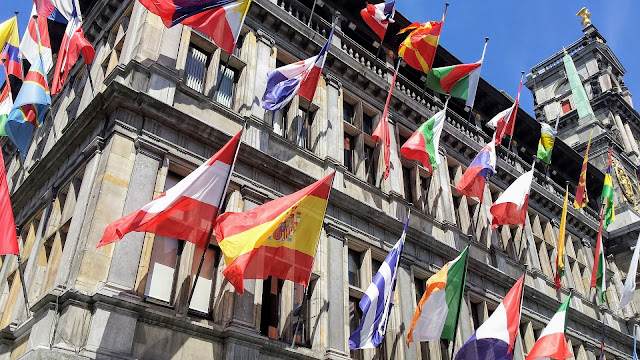 All the flags of the 28 countries belonging to the European Union hang on the façade. In addition, there are flags of all countries that have a consulate in Antwerp.
Location: Grote Markt 1, 2000 Antwerpen, België