The devil’s own cafe in Brussels

By Harry fabel
Le Cercueil or The Coffin, the name of the place says all. It is not a café filled with zombies where the atmosphere is dead. It's a place where you will sit at a real coffin. Placing your glass on the table is done under the all-seeing eye of the corpse beneath it and the cavities in the skull, where the eyes once were, watch you drink your glass. 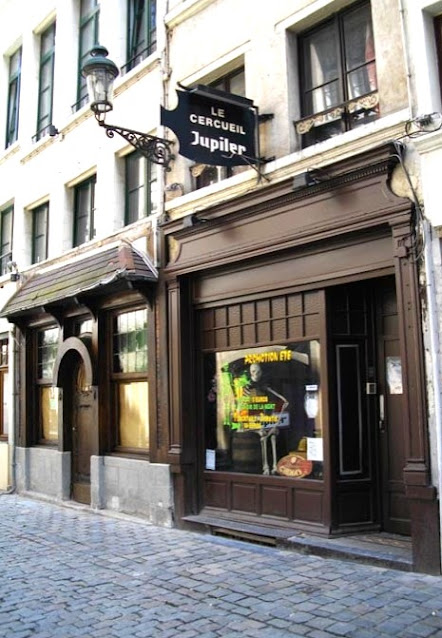 Those glasses, which are available in the standard café shapes, but those who really want to enjoy the unique atmosphere in Le Cercueil, require a "crane" after which your refreshment is served in a skull. The entire place looks microscopically small and with room for perhaps 30 people altogether. In fact, it looks more like a tomb than a traditional café and you are immediately sucked into a devilish atmosphere.

Places like Le Cercueil may have survived the test of time, they must also follow the trend if they are to survive in our consumer society. The menu was therefore supplemented, from a large selection of well-known and less well-known beers to trendy cocktails. You won't find Mojitos and Cuba Libre's. But Totenkopfs, Vampire's kisses, and Satanic Orgasms all the more.
Location: Rue des Harengs 10/12, 1000 Bruxelles, België