The building of the pumphouse started in 1918 and was completed in 1920. The 3 giant cast-iron installations of the building were the largest in Europe at that time, they were able to empty the adjacent dry dock n ° 7 so that a ship in it could be maintained, loaded, and discharged again after the dock was refilled with water.

The shipping company "Red Star Line" used it. One of their ships "Belgenland", which operated a service between Antwerp and New York, was frequently maintained in the dock. The atmosphere of that ship and the luxury of the Art Nouveau era can also be found inside the building.
The centrifugal pumps were performed to empty the dry dock in a time of 2 hours. Since 1982 Het Pomphuis has been taken out of service. The dry dock has meanwhile disappeared to enable a widening of the Albert Canal. In 1996 they even wanted to demolish the building, but the preservation of monuments stopped this and considered it a historical site and building.
The architectural style is eclectic with Jugendstil, Art Nouveau features. Inside there is one large room with an impressive 7 meters deep pit. The stairs against the inner walls of the hall lead to metal galleries with ornate iron parapets on two levels. Also very impressive are the beautiful high round windows with the still original metal rod distribution. 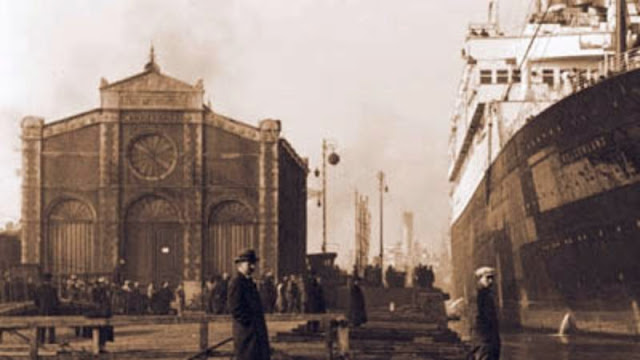 In order not to leave this monument to the test of time, the port authority granted permission to find a new destination for it. After several proposals, it was eventually decided to convert it into an impressive restaurant and bar, the restorations of the building were completed on May 25, 2002. After a spectacular opening, it became clear that Antwerp had a new gem in its diamond city.