In Belgium the most popular sandwich is not ham and cheese, it is a very spicy sandwich that was invented by Albert De Hert, a former football player who owned a restaurant in Antwerp for more than 50 years. Albert De Hert also worked in a snack bar called 'Quick', which was located at the De Coninckplein, near the central station. A square that at that time was full of nightclubs. There he would have launched his famous Martino sandwich. 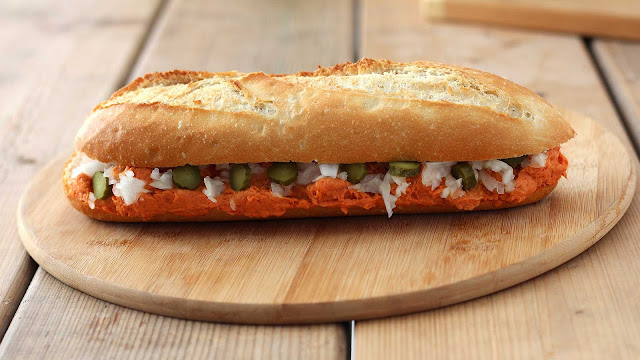 The story goes that another Belgian football player and friend of Albert, Theo Maertens, who called himself Martino, once ordered a spicy sandwich with meatloaf to get over his hangover faster. "Put everything that you have in the cooler on it," he asked, So Albert served him a sandwich with chopped onion, slices of pickle, tabasco, pili, cayenne pepper, ketchup, and Worcester sauce. The recipe was a success and became a popular sandwich in Antwerp and later in all of Belgium, the spicy hangover killer is still very popular today. Several variations of the original recipe are possible.
Belgian food Typically Belgian