The city hall of Sint-Niklaas

After the original town hall burned down the building was replaced by a stylish neo-Gothic building with a belfry in 1874. It was designed by the Ghent architect Pieter Van Kerckhove. King Leopold II and Queen Maria Henriëtte attended the official opening in 1878. 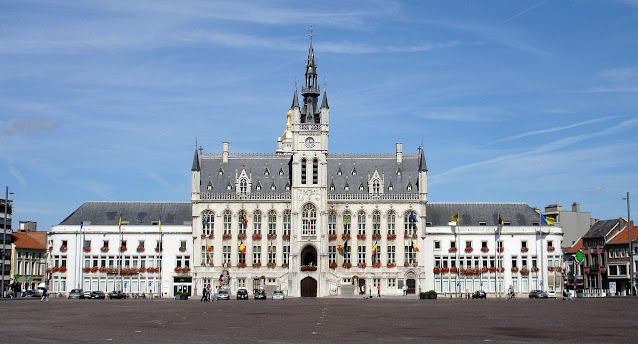 It is a typical example of a neo-Gothic mixture of an old Flemish gothic with a peal of 49 clocks in its belfry The tower of the town hall is about 40 meters high. The interior is decorated with polychrome murals in the Gothic Revival style.
A part of the urban cultural heritage with sculptures, paintings, and engravings is permanently on display. A grand staircase leads to the large wedding hall, where one has a great view over the cities market square. The in front of the town hall is a statue of Saint Nicholas, after whom the city is named.
Sint-Niklaas