Around 1378, the Freÿr castle was given as a fief to Jean Rochefort Oryol by the Count of Namur. His granddaughter Marie married Jacques de Beaufort in 1410. Their descendants are still the owners of the estate today. 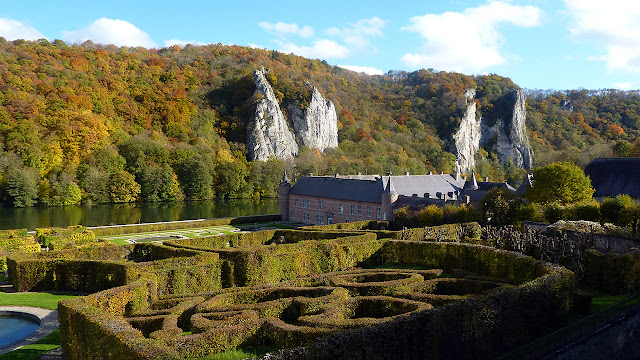 The castle is located in the eponymous village of Freÿr in the town of Hastière in the Belgian province of Namur. The castle is also nicknamed 'miniaturized Versailles'. It is an originally Renaissance chateau that has been enlarged in the 18th century. It was once the residence of dukes and their royal guests.
At the castle a treaty was signed between France and Spain, specifying their borders. The treaty of Freÿr of 1675 was also called the coffee treaty because it was the first time coffee was used in Belgium. The castle has beautiful gardens that include orange trees. The more than three hundred years old orangeries are the oldest ones of the so-called Low Countries. Designed in the style of André Le Nôtre in 1760 by Canon Guillaume de Beaufort-Spontin and enlarged by his brother Philippe in 1770, the gardens are walled terraces located on the left bank of the River Meuse. They have great views of the forests in the north and the Meuse to the east.
Castles