The Menin gate of Ypres.

The Menin Gate Memorial to the Missing is a war memorial in Ypres, Belgium, dedicated to the British and Commonwealth soldiers who were killed in World War I and whose graves are unknown. The gate bears the names of 54 896 missing soldiers. 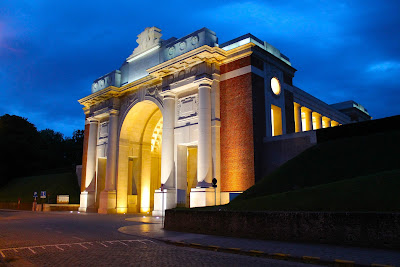 The memorial is located at the eastern exit of the town and marks the starting point for one of the main roads out of the town that led Allied soldiers to the front line. Designed by Sir Reginald Blomfield and built and maintained by the Commonwealth War Graves Commission, the Menin Gate Memorial was unveiled on 24 July 1927. Every night at 20h, the Last Post, the traditional final salute to the fallen, is played by tbuglers in honour of the memory of the soldiers.

You can find the gate at this address: Menenstraat, Ieper.
Ypres