Pillories or Prangers were punishment instruments or monuments. Convicted people were strapped for one or more hours to a pillory to show them off in public places and humiliate them. In addition, permanent pillories were symbols of power and were used as official announcement places for the population of the villages. The pillory of Wilmarsdonk dates back to 1767 and originally stood on the Boulevard in the center of the village for two centuries. There it was used as a pillory for Wilmarsdonk, Oorderen, and Oosterweel, which together at that time constituted as one catholic glory. The three villages have been demolished in 1963 in favor of the expansion of the Antwerp harbor.


To save the pillory it was transferred to the garden of the Antwerp folklore museum in 1965. But the people of the lost villages wanted the pillory back in the neighborhood of its original place. Wilmarsdonk was no longer possible, so a nearby village was chosen, the village of Berendrecht. On October 17, 1970, the pillory was inaugurated at its current location, in the park of the Mayors Verhulst Square in Berendrecht.


The sober, more than five meters high bar-shaped pillar with rounded corners is composed entirely of bluestone. It consists of a round stepped base of two steps, above a plinth with a profile frame. The pillory is topped with a decorative vase. It has the inscriptions "Austruweel" (south), "Wilmarsdonk" (east), and "Oorderen" (north) which are now hardly visible. In the column are also two original and preserved stained summary neck wrought iron holders that were used to tied up the convicted people. 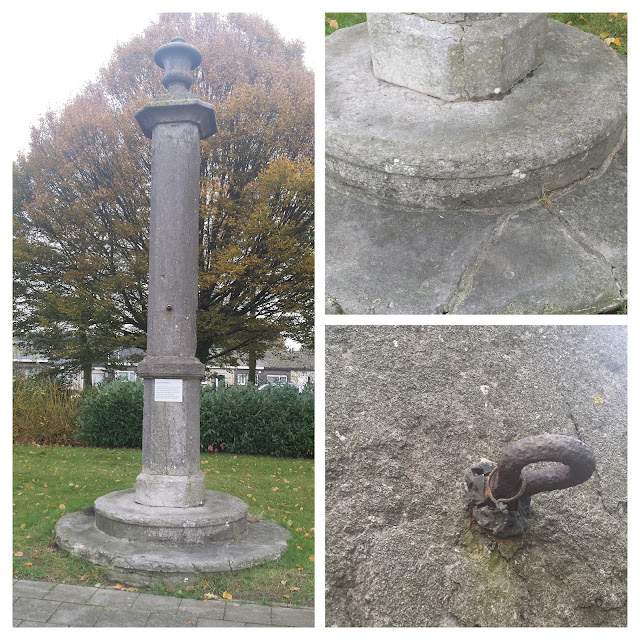 This pillory is the only example of the Antwerp public domain where all elements are still complete and well preserved.
Antwerp