The Manifesto of Karl Marx was written in Brussels

By Harry fabel
The Communist Manifesto is an 1848 political pamphlet by German philosophers Karl Marx and Friedrich Engels. Commissioned by the Communist League and originally published in London just as the revolutions of 1848 began to erupt, the Manifesto was later recognized as one of the world's most influential political manuscripts.

In Belgium, Marx had the most productive time of his life. It was here that his ideas of dialectical materialism took shape. At that time Marx lived in different places in and around Brussels. He was a frequent visitor of  "Le Cygne"(the swan). According to legend, Marx wrote the Communist Manifesto there, drinking wine and smoking a nice cigar. But Marx was too poor for that, instead, he used the backroom of the bar to educate workers about their exploitation by the ruling elite. In his spare time, he wrote the manuscript that would later make him and Friedrich Engels very famous.
The house on the Grand Place in Brussels was built in 1698 in the Louis XIV style. As of 1720, this house became the home of the guild of butchers. Along with the Cornet house, it is the only one on the Grand Place not to reflect the three classic architectural styles. It was in this building, a restaurant, that Karl Marx and Friedrich Engels wrote the "Communist Party Manifesto" in 1847 and that the Belgian Workers' Party was founded in 1885. Today the house is still a restaurant. 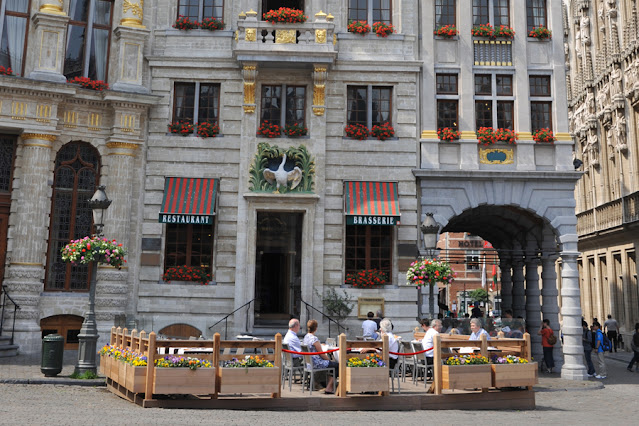 The Communist Manifesto summarises Marx and Engels's theories about the nature of society and politics, that in their own words, The history of all hitherto existing society is the history of class struggles. It also briefly features their ideas for how the capitalist society of the time would eventually be replaced by socialism.
Location: Grote Markt, 1000 Brussel, België