Jeanneke and Zinneke Pis in Brussels

By Harry fabel
Jeanneke Pis is a statue in the center of Brussels of a girl who is urinating. The sculpture is made in 1987 on the initiative of the local merchants in order to lure more visitors to their street. The inspiration comes from the famous Manneken Pis, only a few hundred meters away at the corner of the "Stoof and Eikstraat".

The design of Jeanneke Pis was realized by Denis-Adrien Debouvrie, a businessman, sculptor, and owner of several restaurants in the area. He first made a drawing of the little girl on a piece of paper after a busy day in one of his restaurants. Jeanneke Pis should emphasize equality between men and women. Jeanneke is also in a geographical sense, the counterpart of the famous little Brussels guy.
Unlike Manneken Pis, there are no other historical stories behind Jeanneke Pis, she also has no wardrobe like Manneken Pis has. The biggest difference between Jeanneke and Manneken Pis is the fact that Jeanneke Pis is kept behind bars and is not as old as the Manneken Pis statue, he goes way back to the 15th century.

Manneken and Jeanneke Pis are not the only peeing statues in Brussels, There is another. It’s the Zinneke, a dog! "Zinneke" in Brussels dialect means someone of mixed origins, symbolizing the mixture of populations living in Brussels. You can find the Zinneke Pis statue at the "Kartuizersstraat" or the "Rue de Chartreux" in front of number 31. 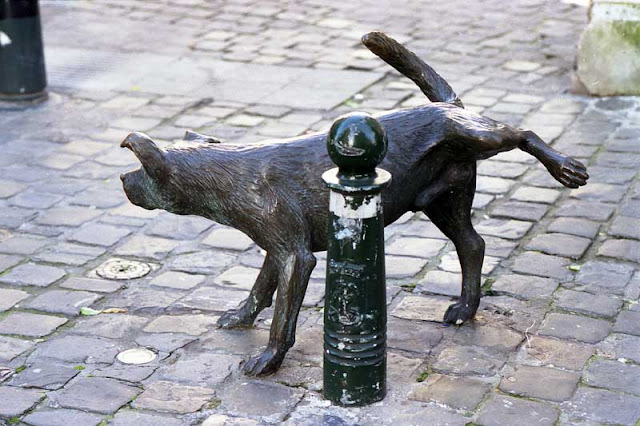 The statue of Jeanneke Pis you can find at the back of the cul "Getrouwheidsgang", or the "Impasse de la Fidélité" in the Brussels district Îlot Sacré. This is a side street of the very busy Rue des Bouchers near the Grand Place.