The great triumphal of Ghent

In 1314 Jan Van Lüdeke and Jan Van Roosebeke made a big alarm bell, they called it Klokke Roeland The bell was used as a storm bell in the tower of the belfry and remained there till 1659. Then she was demolished by Pieter Hemony who remelted the 12,000-pound bronze bell into a new carillon of 40 bells. One of the bells 'The Great Triumphal "was the biggest bass bell of that carillon and popularly adopted the name "Klokke Roeland' just like its predecessor.
In 1914 the carillon was switched over to an electric system. However, this system was not working very well and due to severe vibrations there was a large crack in the "Roeland Bell". This crack was not restored immediately and until 1949 she was therefore not playable. In that year, the clock is extracted from the tower and replaced by a new one. The "Roeland Bell" got a memorial spot at the foot of the Belfry. 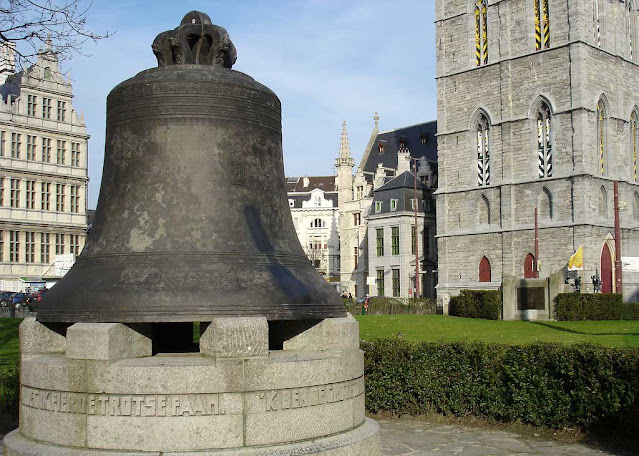 In 2002 it was decided to fix the crack, which was there for almost 90 years. To do that she was taken to a special company in Asten in the Netherlands. Later the reappeared bell was put back on her usual spot at the foot of the belfry. Between 2009 and 2012 the square where the bell was on was being redesigned so the clock had to move again. This time she was stored in the city warehouses. The new square has a concrete bell box which was originally intended to hang up another bell The Mathildisklok But because of a disagreement, the city of Ghent decided to hang up the 'Great Triumphal' instead. 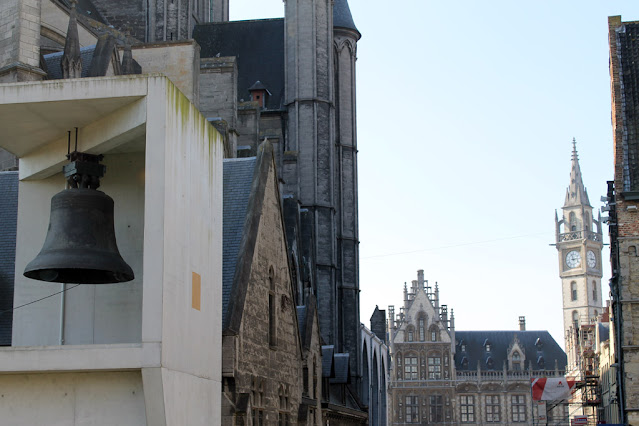 So now the "Klokke Roeland" or the "Great Triumphal" has her final spot and can be used again for special occasions and celebrations in her new concrete box on the Emile Braun Square.
Ghent