Today's most popular carrier or racing pigeon comes originally from Belgium. Crossbreds with different species at circa 1850 created the "Belgian racing pigeon". The pigeon racing sport has had a major influence on the development of the bird later on.
Already in the early 19th century races were organized in Liège, Ghent, Brussels, and Antwerp. After 1850, the carrier pigeon was introduced in northern France, later in the Netherlands, Germany, England, etc. In 1900, this Belgian pigeon with the corresponding racing sport spread virtually over the entire world. The sport is very simple. The pigeons are all taken to a distant location and are there released at the same time, the pigeon that returned the fastest to his home "dovecote" or "loft" wins the race.
Army's around the world made use of the Belgian pigeon in 1870. In the Franco-Prussian War (1870-1871) at the siege of Paris, the Belgian pigeons were used for the first time to send messages. Since then every army had seen the effect and the skills of the carrier pigeon. The German army established a military pigeon service with stations in different cities. The Russian army bought 5000 pigeons in Belgium. The French government had a pigeon station set up in Paris for 25 000 birds, while each corps received a detachment of 500 pigeons. During the first World War, the pigeons were the leading way of communication. 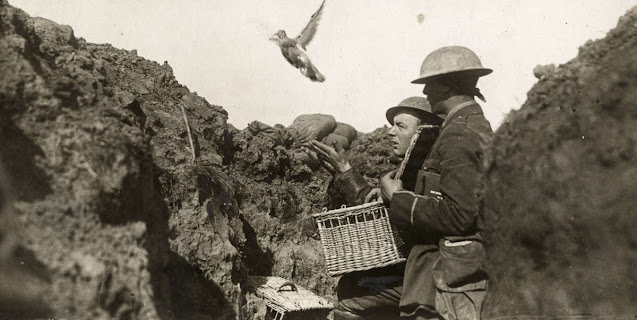 Some pigeons became hero's during and after the war, like "Cher Ami". On October 3, 1918, Major Charles White Whittlesey and more than 500 men were trapped in a small depression on the side of the hill behind enemy lines without food or ammunition. Only one pigeon was left: "Cher Ami". She was dispatched with a note in a canister on her left leg, As Cher Ami tried to fly back home, the Germans saw her rising out of the brush and opened fire. For several moments, Cher Ami flew with bullets zipping through the air all around her. Cher Ami was eventually shot down but managed to take flight again. She arrived back at her loft at division headquarters 25 miles to the rear in just 25 minutes, helping to save the lives of the remaining 194 survivors. In this last mission, Cher Ami delivered the message despite having been shot through the breast, blinded in one eye, covered in blood, and with a leg hanging only by a tendon.
This is the message Cher Ami carried read: “We are along the road parallel to 276.4. Our own artillery is dropping a barrage directly on us. For heaven’s sake, stop it.” 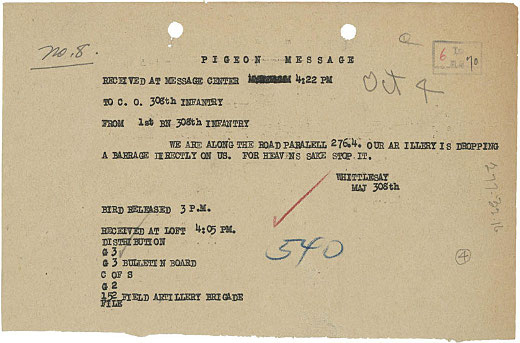 Cher Ami became the hero of the 77th Infantry Division. Army medics worked long and hard to save her life. They were unable to save her leg, so they carved a small wooden one for her. When she recovered enough to travel, the now one-legged bird was put on a boat to the United States. Cher Ami died less than a year later due to complications from her injuries. She was stuffed and is kept on display at the Smithsonian in Washington, 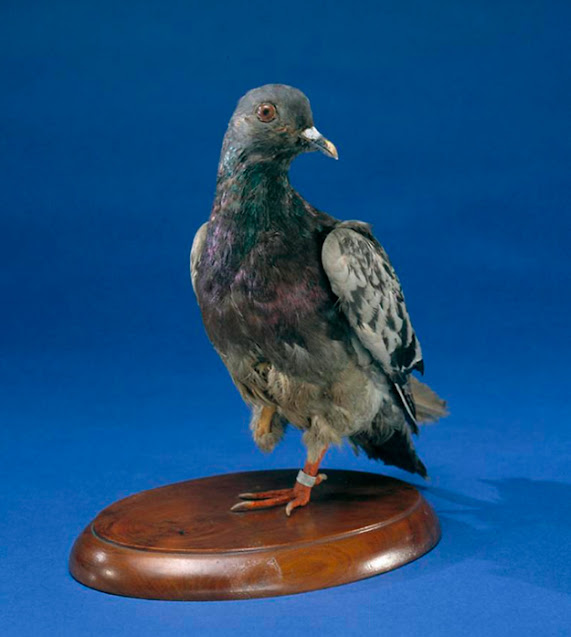 Today the pigeon racing sport is still popular in some places in Belgium, but it needs a fresh approach to survive the upcoming years. Not a lot of young generations and their pigeons enter the race.