The world map, a Belgian invention

By Harry fabel
Gerardus Mercator (5 March 1512 – 2 December 1594) was a Flemish cartographer. He was born in Rupelmonde, Belgium. He is remembered for the Mercator projection world map named after him. Mercator was born Gheert Cremer or Gérard de Crémère in the Flemish town of Rupelmonde to parents from Gangelt in the Duchy of Jülich. 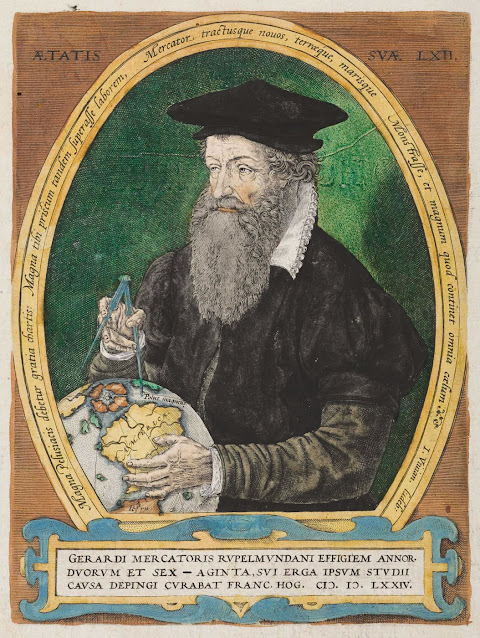 Mercator is the Latinized form of his name. It means "merchant. He was educated in 's-Hertogenbosch by the famous humanist Macropedius and at the University of Leuven. Despite Mercator's fame as a cartographer, his main source of income came through his craftsmanship of mathematical instruments.
In Leuven, he worked with Gemma Frisius and Gaspar Myrica from 1535 to 1536 to construct a terrestrial globe. Although the role of Mercator in the project was not primarily as a cartographer, but rather as a highly-skilled engraver of brass plates. Mercator's own independent map-making began only when he produced a map of Palestine in 1537; this map was followed by another -- a map of the world (1538) and a map of Flanders (1540). During this period he learned Italic script because it was the most suitable type of script for copper engraving of maps. He wrote the first instruction book of Italic script published in northern Europe.
Mercator was charged with heresy in 1544 on the basis of his sympathy for Protestant beliefs and suspicions about his frequent travels. He was in prison for seven months before the charges were dropped possibly because of intervention from the university.
In 1552, he moved to Duisburg, one of the major cities in the German Duchy of Cleves, and opened a cartographic workshop where he completed a six-panel map of Europe in 1554. He worked also as a surveyor for the city. His motives for moving to Duisburg are not clear. Mercator might have left the Netherlands for religious reasons or because he was informed about the plans to found a university.
He taught mathematics at the academic college of Duisburg. After producing several maps, he was appointed Court Cosmographer to Wilhelm, Duke of Jülich-Cleves-Berg in 1564. He constructed a new chart and first used it in 1569. It had parallel lines of longitude to aid navigation by sea, as compass courses could be marked as straight lines. 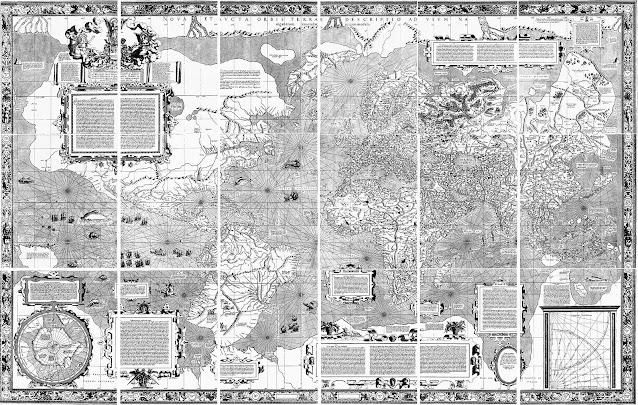 Mercator took the word atlas to describe a collection of maps and encouraged Abraham Ortelius to compile the first modern world atlas, Theatrum Orbis Terrarum, in 1570. He produced his own atlas in a number of parts, the first of which was published in 1578 and consisted of corrected versions of the maps of Ptolemy (though introducing a number of new errors). Maps of France, Germany, and the Netherlands were added in 1585 and of the Balkans and Greece in 1588; further maps were published by Mercator's son Rumold Mercator in 1595 after the death of his father.
Mercator devised a technique to produce globes, celestial as well as terrestrial, by techniques of relative mass production. Globes at the time were laboriously produced by engraving upon a sphere of wood or gilded brass. Mercator molded globes of paper-mâché on a wooden mold, then cut them along the equator; once reassembled, the globes were coated with gesso, a white mixture of thin plaster, and sizing. Mercator engraved and printed sets of world maps on twelve tapering gores, with curved edges that narrowed towards the poles. These twelve gores were cut out and applied to the globe. Circular engraved caps covered the ends at the poles. After the globes were hand-tinted with watercolors, they were set in wooden stands with calibrated brass horizon rings. Twenty-two such pairs of Mercator globes have survived. 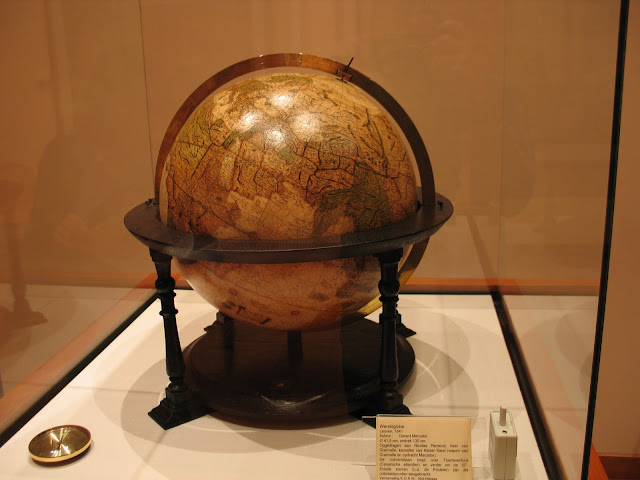