The legend of the hailstorm cross

According to the legend, long ago there would often have been severe hailstorms in the town of Ekeren, a place in the north of Antwerp. The hail storms were accompanied by fierce wind storms and rain that destroyed the fields and their crops. One day, the day after our Lord's-Ascension Day, it was on a Friday, there was yet another big hail storm, one of the worst ever. But this time the hail melted very quickly, except in one particular place, the hail remained in the form of a big cross.
The people from the town thought the fields were haunted and immediately set an alarm for the church. The local priest sounded the tower bells and the villagers were all gathered to move in prayer to the place where the cross had appeared. They prayed there for hours from that moment on the severe hail and thunderstorms kept away forever, but only on one condition said the pastor, as long as the people of the village kept remembering the day the hail cross appeared.
So to remember and in gratitude, a large bluestone cross was made and was erected on the place where the hailstorm cross appeared and the people called it the Hagelkruis or Hailstorm Cross. Hagelkruis celebrations also took place from that moment on, allegedly already in the second half of the 15th century. The celebrations and the cross were known far and wide, there is even a mention of a man in the city of Aalst, one hundred kilometers away, who was sentenced to a pilgrimage to the "Hagelkruis" in Ekeren. A long journey at that time.

David Teniers the Younger has made a painting in 1646 with the Hagelkruis Celebrations as a theme. A studio replica of the painting hangs in the National Gallery in London. The title there is, "A country festival near Antwerp." On the painting, you see the Hagelkruis on the right. The city in the background is Antwerp. 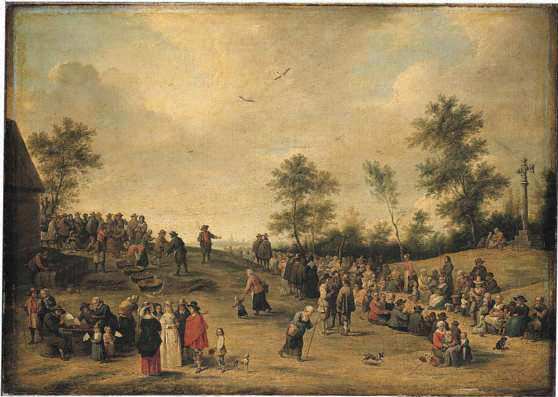 The original cross has disappeared over the centuries, the celebrations too. But on October 3, 1981, there was a new cross re-established in the same place by the Davidsfonds of Ekeren, a local Christian organization. You can find the hailstorm cross at this address: Groot Hagelkruis, next to the Moretus campus Lambertus school in Ekeren, Antwerp.