Legend of the Bruges swans

By Harry fabel
It was March of 1482. Mary of Burgundy came to visit her beloved Bruges to practice her favorite hobby falconry. But her horse tripped during the chase, she fell off and died. Her husband, Emperor Maximilian of Austria, alarmed by this accident, hurried and rushed to Bruges. Because of the incident, the Emperor started to hate the city. He took away most of the privileges the people of Bruges had and even created new taxes. He began a new and hard regime without his beloved Mary and left the city.

One day Emperor Maximilian came back to Bruges to set up some new rules and taxes. The people from Bruges, which have always been known as rebellious, imprisoned the Emperor immediately. 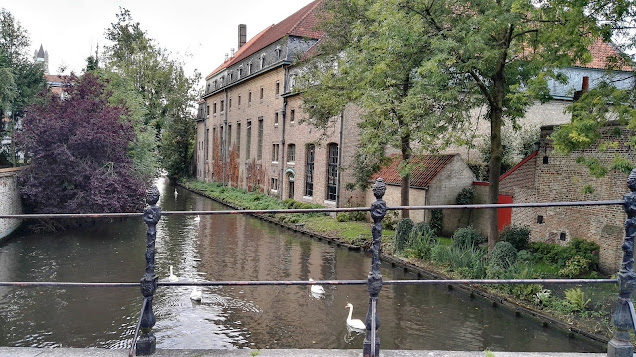 Pieter Lanchals, (Lanchals meaning Long Neck, a swan species) the bailiff of the Emperor condemned this act of the people. But the locals in their turn did not accept this from the bailiff, so Lanchals and other noblemen were arrested, tortured, and decapitated while Maximilian was able to follow the whole horrible event from his cell. Maximilian meditated revenge, but for now, he gave the Bruges people back their privileges and he was released. He fled back to Austria.

Later he returned to Bruges, not alone, he brought a whole army with him. The soldiers were allowed to plunder as much as they wanted. As a reminder of the escutcheon of his bailiff Lanchals, the city of Bruges was condemned to let "lanchalzen" breed on the city's canals. These lanchalzen are the white swans you still see there today.