By Harry fabel
Sometimes art and folklore don't have to be old and history can be in the making as we speak. This story is about a fairly new statue with a history that is not yet been made but who knows it will be in the future.

The "Bierpruver" in English "The Beer Taster" is a little statue on the market square of the village of Ekeren, now a district of the city of Antwerp. The village wanted something new to bind them together and create a new way to stand out to other villages in the neighborhood. The initiative to make a "De Bierpruver" figurine was taken by the board of directors of Ekeren in its meeting on 21 May 1984 and is based on an old nickname given to the people from the village, the "Bierpruvers". 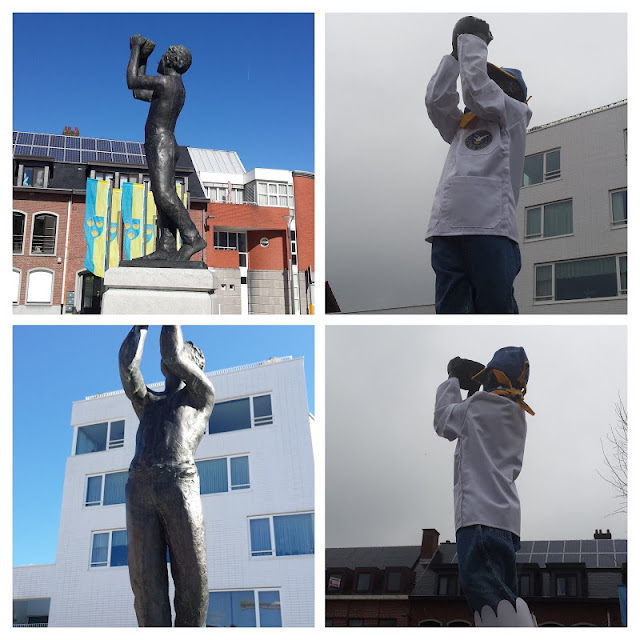 The name was given to them because in the 17th century there were a lot of breweries in the neighborhood. All those breweries are gone now but the nickname remained and was taken over by the local carnival association that organizes a parade once a year.  Although the decision was made then, it took until September 9, 1990 before the "Bierpruver" was actually put on his pedestal. The monument depicts a male beer taster holding an 'Aker", a copper cauldron in which former beer was brewed. The statue originally stood at the "Geesterspoor", a neighborhood in the district of Ekeren but was later moved to a more central place on the newly renovated "Kristus Koning Plein".

The godmother of the little statue, "Mia Hoeykens" clothes it with homemade costumes on special occasions, just like Manneken Pis in Brussels. A local brewer "Werner Mertens" has brewed its own beer in honor of the small statue. "The Bierpruver Triple". Every year "De Bierpruver" has his own festivities that grow every time and becomes one of the highlights of the village of Ekeren and its community.

You can find the statue at this address: Kristus Koning Plein, Ekeren.
Antwerp Belgian beer