By Harry fabel
Het Steen, the oldest preserved building of the city of Antwerp, was built between 1200 and 1225 after the Viking incursions in the early Middle Ages. It was originally called the Castle of Antwerp. Inside the castle were key institutions such as the "Vierschaar" (former courthouse), the "St. Walburga Church", "Het Reuzenhuis" (Giants House), "Het Steen" (The Rock), "The Yard" and the "Fish Market".Unfortunately, the building, preserved to this day, is only a small part of the old fortress. The old fortress covered an area several times larger. The entire complex was surrounded by a massive defensive wall. At that time the fortress made it possible to control the access to the Scheldt River and to guard the entrance to the city from the direction of the Western Scheldt. 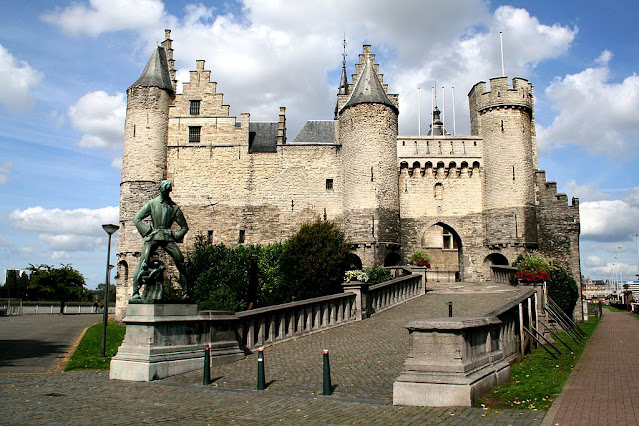 The castle was rebuilt many times, but you can still see fragments of the original castle, relating to the 13th century, it is easy to distinguish it by the darker colored walls. Around 1520, at the time of Charles V, the castle was again thoroughly renovated and was called henceforth the "'s Heeren Steen" (Stone of the lord). In 1549 Charles V donated the building to the city, which had owned it until 1828. From 1303 to 1823 the building was used as a prison, then it served as a home for disabled soldiers. After the government had claimed the building in 1827, it was sold a year later to a sawmill. In 1842, however, the city bought the building back. A large part of the castle was demolished in the 1880s when the city modernized the quays along the Scheldt. The remaining building was hereinafter referred to as simply "Het Steen" (The Rock). Immediately a new wing was built in 1889-1890 and the city also cultivated other parts of the building. 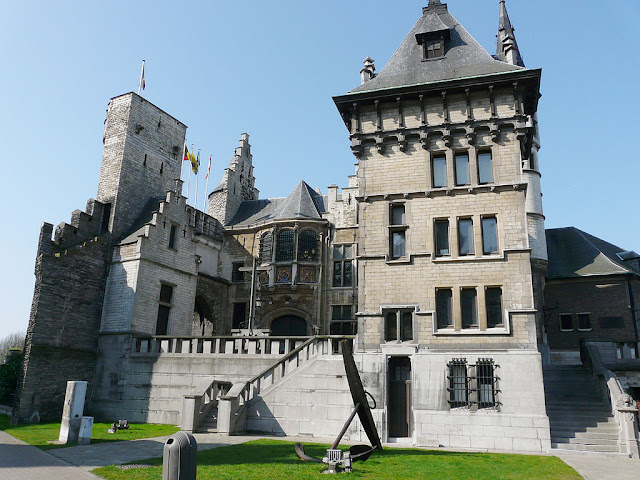 In 1862 Pieter Génard suggested that as a member of the Antwerp Committee of members of the Royal Commission of Monuments it would be wise to establish an archaeological museum in every province of Belgium. According to him, "Het Steen" would be an appropriate place in Antwerp for this museum. The city supported the proposal and so works were started by architect Kennes with a restoration of the castle. On August 14, 1864, the museum opened This museum was replaced in 1952 by the National Maritime Museum, which however immediately from 1953 to 1958 was inaccessible due to renovation works. The inside part of this museum eventually closed its doors on 28 December 2008. The collection of the Maritime Museum was moved from 2010 to the newly built Museum "Aan De Stroom" also called MAS. The building was rezoned in 2012 to Het Steen der wijzen" (Stone of the wise), An active house for thinkers, dreamers and doers.